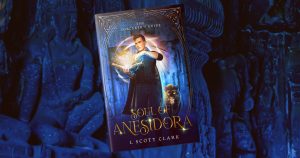 Book 2 of The Sorcerer’s Guide – Soul of Anesidora has received some great reviews through Readers’ Favorite. Check them out!

Soul of Anesidora by L. Scott Clark is the second book in The Sorcerer’s Guide series. Jet’s life hasn’t been the same since he discovered the truth about magic and learned about his role in a deadly adventure that puts him on the path to locate the pieces of the Phoenix. He must navigate between his new magical role and the war that has drawn him into the middle. Jet and his allies are in a race against a dangerous enemy to retrieve the next piece while facing shocking revelations and journeying to help his boarding school when it comes under attack.

Jet’s facing the next step in his journey which is as layered as the first book with more action and adventure while creating more opportunities for him to grow into a hero. The story builds suspense through the race for the next piece of the tablet before Shane does and creates urgency in Jet’s journey with war, the attack on the school, and other fights. The story has a variety of characters that add layers to the world and provide allies or obstacles for Jet. Jet’s life is torn between what his life was with the boarding school and his friends, and his magical one. The various characters each play a significant role in his journey whether it’s dealing with them as obstacles or working alongside them as allies. Several familiar faces are back from the first book with threads continuing over such as his friends from school, dealing with Vinny, and racing against Shane for the Phoenix pieces.

The story seamlessly weaves into the next stage of the journey and ups the amount of danger that he faces. As more of this magical world unfolds, more danger seeps into his life and follows him wherever he goes, even attacking his boarding school. The evolution of his hero’s journey has brought Jet through various challenges and battles to create a quest that brings them one step closer to getting all the pieces of the Phoenix. L. Scott Clark further expands the world with an assortment of magical elements with Runic and Elemental magic, rules, and creatures. These elements create an urban fantasy setting within the rich and detailed world of an epic fantasy adventure. Soul of Anesidora is a fast-paced fantasy epic with action-packed moments, magic, battles, and a hero’s journey.

Soul of Anesidora is a work of fiction in the fantasy and adventure subgenres. It was written for the young adult reading audience by author L. Scott Clark. As part of The Sorcerer’s Guide book series, we find ourselves back with teen protagonist Jet Black after the events of Path of the Phoenix. Since discovering his magic, Jet has faced many trials, and getting hold of the second tablet piece of the Phoenix is going to prove just as difficult as the first. As Jet races to be the first to obtain it, new challenges and harrowing trials emerge that threaten his entire future in mind, magic, body, and soul.

Author L. Scott Clark has crafted a superb young adult fantasy adventure tale with plenty of twists, turns, and excitement to keep both the target audience entertained and many adult readers looking for an exciting series to sink their teeth into. Jet is a charming figure for a central protagonist, endearing, relatable, but also filled with spirit and energy. Something I especially enjoyed all the way through the story was the use of foreshadowing and atmospheric touches to keep the tension high in every chapter so that the audience is always on edge for the next exciting thing to occur. The worldbuilding is also solidly crafted and more intriguing with every new discovery. Overall, I would certainly recommend Soul of Anesidora to fans of the series so far, and for any reader looking for a talented fantasy author to add to their list of favorites.

Soul of Anesidora is the second book in The Sorcerer’s Guide Series by L. Scott Clark. In Path of the Phoenix, you became witness to the reawakening of magic as the protagonist Jet Black took possession of a magical book that seems to have a mind of its own. This time, Argentina takes center stage for the next destination, as the race to complete the missing tablet pieces continue. Jet must beat Shane Fallon in the search as Shane has spent every moment over the last year and a half bullying and harassing Jet at every turn. Shane wields Runic magic while Jet wields Elemental magic, and they have been competing against each other to find the remaining pieces of the Phoenix tablet and prevent a sinister evil from killing everyone. But Jet will go missing in Argentina, and what he will find in the process is a gift for the Mikado of Elemental Magic.

Since young adult adventures often require origin stories, Soul of Anesidora does not disappoint as far as continuity is concerned. Judging from its narrative alone, you can tell that L. Scott Clark is passionately writing modern parallels of mythology and sorcery, and this series may well find its way into the pop culture zeitgeist. The plot continues to heat up as Jet and his friends are led into situations that put all of them in harm’s way, but the task has to be done for a cause that is greater than one’s own. This is one of those rare YA books where I was able to build a strong connection with the characters. L. Scott Clark doesn’t merely define them by their attributes, but they have distinct personalities to speak of rather than just doing what the plot requires them to do. Soul of Anesidora has a fantastic premise, but you will be enthralled by the practical aspects of the storyline. I recommend it to anyone who has a taste for good young adult fantasy adventure.

Soul of Anesidora is the second novel in The Sorcerer’s Guide by L. Scott Clark. The life of the protector of magic is not easy, and Jet Black is experiencing that first-hand. Wielding elemental magic was his only problem before, but now, he and his friends have to find the next piece of the Phoenix. So, Jet and his close friends travel to Argentina to find the second tablet piece and get back home as quickly as possible. However, things take a dangerous turn when they are attacked. Barely making it out alive, the survival of magic and his own life depends solely on Jet’s shoulder. He needs to get hold of his magic, control it, find the second tablet piece, and get back to Chadwicks before it is too late. Can he do it all?

Although I didn’t read the previous novel in the series, I had no issues with falling right into Soul of Anesidora. Jet is the kind of protagonist that grabs your attention from the first introduction and makes you think about him even after you have finished the story. He is genuine, very charming, and incredibly talented. Jet is, perhaps, the best-written character I have encountered in the last few months, and all the credit does to author L. Scott Clark. Jet’s development is fantastic, his character arc drives the story forward and makes the pace perfect to keep the attention of readers on the plot. I finished this story in a single sitting and read it until early morning. The mystery behind the attackers was surprising, and the way Jet handled the situation. This phenomenal story is perfect in every aspect!

Soul of Anesidora is a young adult adventure novel in The Sorcerer’s Guide series by L. Scott Clark. Jet Black is part of a student group gifted with Elemental magic at Chadwick Boarding School. After finding The Sorcerer’s Guide that enables him to understand the potency of light and dark magic, Jet and his teammates travel to Argentina to investigate peculiar phenomena, but they are attacked by mythical creatures, and Jet is seriously injured. Shane Fallon uses his Runic magic to thwart Jet from obtaining more magic and relics but asks for unity when their school comes under attack from Chupovanas monsters. Although distrustful of Shane’s motives, Jet agrees, but his weakness and visions cause him to react differently. Could this endanger their lives even more as the enemy comes closer to them?

It seems that having magical skills may not be so awesome after all. Just ask Jet as he’s had to make some very serious and painful life-threatening decisions to save himself and others. Soul of Anesidora is a deeply intense paranormal story with lots of action and wizardry. If you have ever watched Power Rangers, Harry Potter, and Lord of the Rings, then get comfortable. L. Scott Clark’s novel has dynamic characters who are gifted with magic to control fire, wind, ice, water, and other elements. Jet is a serious-minded young man who has suffered so much. The mystical creatures really seemed terrifying and the exciting action just kept coming from the fast-moving pace of L. Scott Clark’s writing. Soul of Anesidora is book two in The Sorcerer’s Guide series for young adults. 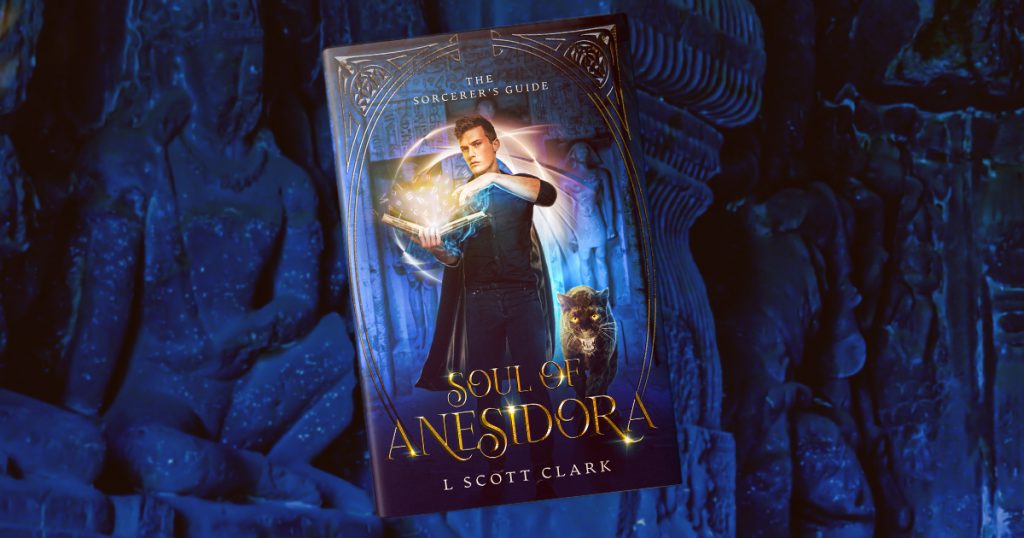 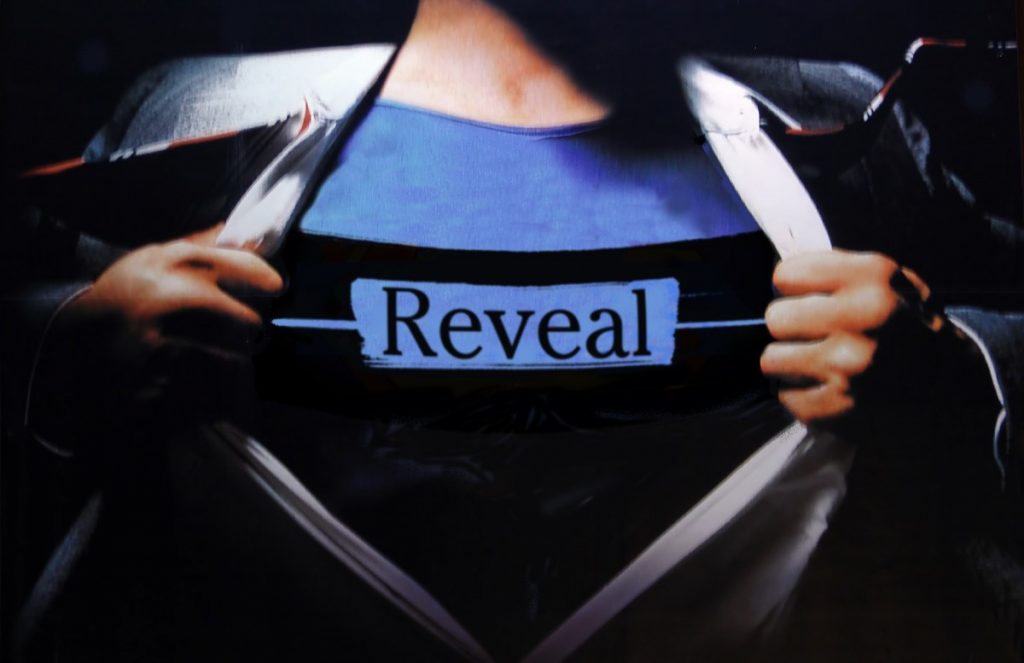 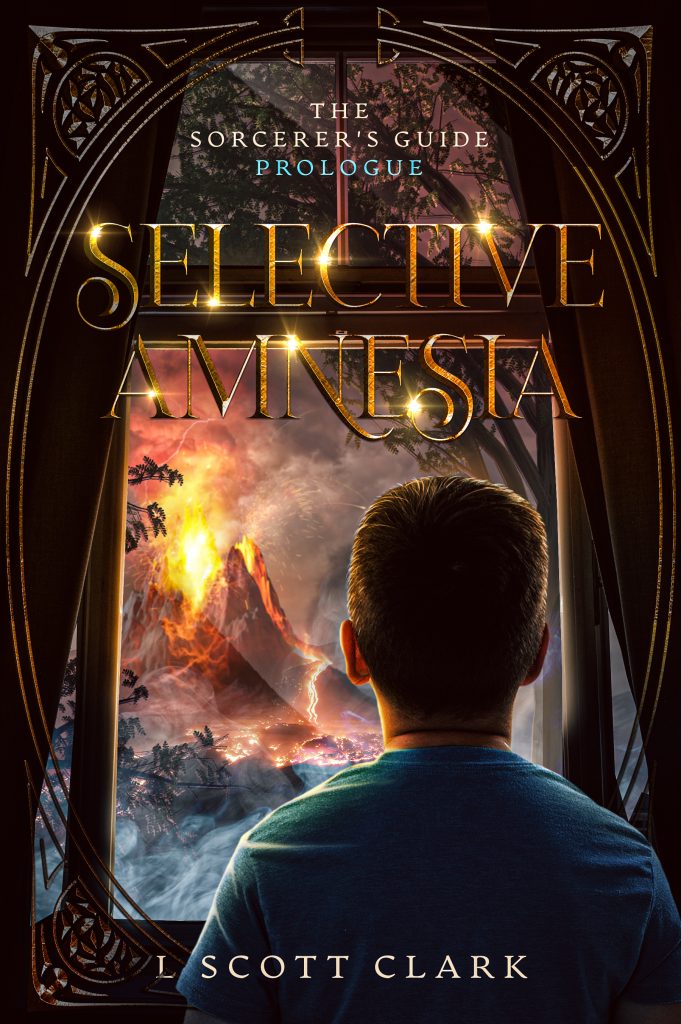